Replica bronze gargoyles stand watch over this completely restored Toronto landmark. Copper roofing and details assure that it will function long into the future.

A restoration phase of Old City Hall in Toronto was completed recently, restoring part of the gem by Architect E. J. Lennox to contemporary standards. Part of the project included the replacement of the copper roof and many of the details that were part of Lennox's original vision.

Originally the roof was tiled, which was later replaced with copper, because of the lack of maintenance required. The Old City Hall was built in the years just prior to the turn of the century, and it was the result of a competition held in 1884. At first intended as a courthouse, the functions of a city hall were added as the budget ballooned to $2.5 million. For a city of only 150,000 inhabitants, it was a grand statement. Today the building serves as a courthouse, fulfilling its original purpose.

Over the years there have been numerous small programs to repair certain sections of the structure as necessary. They included segments of the steeply sloped copper roof as late as the mid-1980s. In the latest program, an enduring commitment, a decision was made to replace the entire roof area, on the exterior, in the courtyard, and on the clock tower, and to repair the stonework to bring the structure to a uniform state. The task fell to The Ventin Group Architects, a firm well experienced with projects of this nature, having completed the restoration of the Legislature at Queen's Park, the County of Lennox civic building, and Castle Kilbride in Baden, Ontario. The budget for the project was $35 million. The roof is 20-oz. copper sheet, laid in a batten seam pattern. The roof itself is made up of ½" plywood laid over the existing deck. This is followed by a peel and stick membrane and insulation spaced with wood sleepers. Finally ¾" tongue-and-groove plywood was used and covered with Roofshield, an underlayment system relatively new to North America, but used extensively in Europe with copper and other metal roof systems.

Because of the numerous dormers, snow guards, and other details, including the installation of bronze replicas of four stone gargoyles that had been removed in 1938, the work was time consuming and required special attention and care. It was undertaken by Heather & Little Limited, of Markham, a roofing contractor with extensive experience with copper. Incredibly, Old City Hall was threatened with demolition during the planning for the Eaton Centre. Thanks to groups of concerned citizens, it was saved and today enjoys the designation as a Canadian National Historic Site.

The newly completed restoration will ensure that it continues to function efficiently for many more decades, while fulfilling the role of a Toronto landmark. 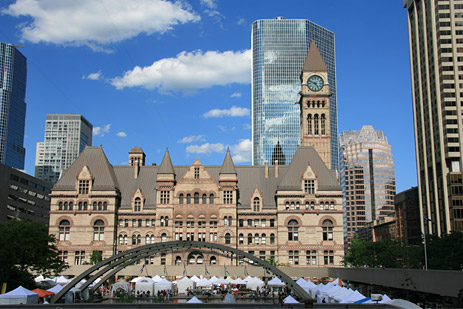 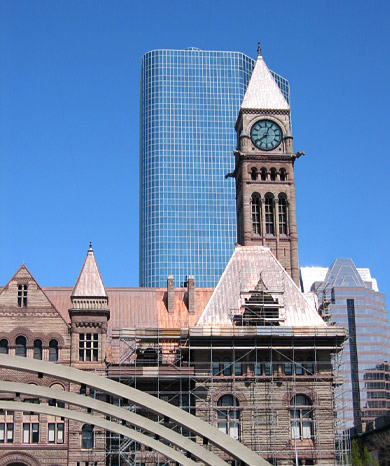