The Massachusetts General Hospital Paul S. Russell, MD Museum of Medical History and Innovation relied on copper for contextual, sustainable, budgetary, and architectural details. Contextually, copper was an appropriate choice for the building since it is sited at the foot of Boston’s Beacon Hill, which features small-scaled brick buildings that are ornamented with copper-trimmed oriel windows.  The museum is also located down Cambridge Street from the Charles elevated subway station, which was recently enlarged and faced with green pre-patinated copper. Over time, the museum will gradually transform from brown to a natural green patina that will resonate with the Beacon Hill bay windows and Charles Station. The use of copper contributed to meeting Massachusetts General Hospital’s sustainability goals with its long life span and recyclability. When various cladding alternatives were considered, copper was discovered to be significantly less expensive than curtain wall systems made of brick. Architecturally, copper was chosen for a number of reasons. Bright new raw copper initially performs as a beacon, illuminating the building’s new function as a gateway to Massachusetts General Hospital, contrasting against the greys and tans throughout the rest of the campus. The metallic cladding appears light and appropriate floating above the glazed first floor gallery. The copper wrapping of the second story combines with a copper-fritted glass to give the building the feel of a precious object. A second floor oriel window punctuates the copper plane and gives visibility to the museum from blocks away on Cambridge Street. The alternating standing and flat seams of the handcrafted copper cladding allows for a smaller scale over the block-long solid façade and differentiates between the gallery portion of the building, where the seams run horizontally, and the more solid core, where vertical joints were used. Approximately 10,800-square-feet (1,000m2)  of copper cladding were installed. Various weights and types of copper were used in different areas; 16-ounce raw bare copper was used for the typical cladding, with 20-ounce copper used at the rear canopy, and 32-ounce copper used for the bay windows, parapets and the perforated panels for ventilation at the vestibules. 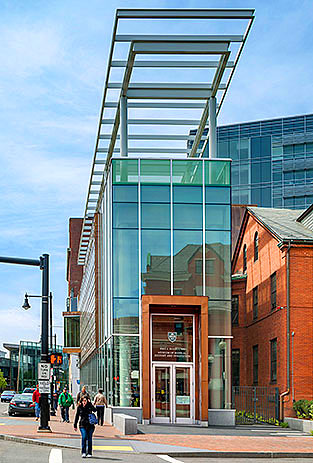