NYC Public School 39, founded in 1877 in Park Slope, Brooklyn, is one of the nation’s oldest schools in continuous use. Due to the careful and effective exterior rehabilitation of this building, highlighted by the replacement of the historic cornice in new copper, it will continue to serve future generations of students. The NYC School Construction Authority (SCA) assigned this project to the firm of Ivan Brice Architecture, which completed all phases of design and construction. Initially approached as a simple remediation project to address water infiltration, survey work indicated that the long-term effects of weathering, along with previous piece-meal repair projects, had led to severe deterioration of the original wood cornice and a compromised building envelope. During the design phase, it was decided that the most cost-effective and durable replacement would be ornamental formed copper, specifically due to its malleability, which would allow the existing wood millwork to be easily replicated. As a landmark building, all design and fabrication decisions were subject to approval by the N.Y. State Historic Preservation Office. Unable to add any weight to the masonry walls, the new cornice and gutter system was designed to be supported by the building’s heavy timber roof trusses, thus avoiding any tension or compression stresses in the brick masonry. The old cantilevered wood joists were replaced with 7” x 3” (18 cm x 7cm) rectangular steel tubes spaced 3’-8” (90 cm – 21cm) projecting two feet (60 cm) from the outside face of the walls and placed at the underside of the continuous cornice gutter. Once the new steel cantilever support structure was designed and installed, fabrication of the new copper gutters and cornice began. This process involved careful documentation, detailed preparation and extensive shop drawings in order to replicate the original cornice, including its dentils, brackets and fascia elements. Gotham Metalworks completed the copper work. Approximately 1,000 sheets of Revere Red Copper were utilized to manufacture the 44 decorative replica brackets, 308 large modillions and extensive cornices with hundreds of dentils. Twenty ounce hard-rolled sheets were used for the cornice panels, fascias and formed trim; 16-oz. hard-rolled sheets were used for the fabrication of smaller items where more malleability was required; and 16-oz. soft copper was used for the stamped fluted faces of the decorative brackets. Castings and dies were made from the original wood decorative brackets, and fluted bracket faces were stamped in copper to match. The decorative Fleur de Lis detail, which was cut into the face of the decorative brackets, was utilized to create matching snow guards on sloping copper roof areas where needed. Every attempt was made to eliminate or reduce exposed fasteners to ensure an attractive installation. In addition to aesthetics, extensive attention was given to the proper handling of expansion and contraction of the copper. Overlapping copper components were designed with slots and notches to allow normal movement. New gutters were designed with joints for expansion; a raised copper baffle was installed to keep them from overflowing; and new copper leaders were fitted to prevent electrolytic reactions. A unique challenge was presented at the west stair tower, where the original crowning mansard roof—rising approximately 12 feet (3.5m) above the cornice—had been removed in the 1940s, with the cornice later substituted by a reinforced stucco fascia. It was determined that the best option would be to fully reconstruct this cornice in copper to closely match its original features. Photos of the original school were carefully studied, and a replica of the original wood cornice was recreated in copper including matching frieze panel, moulding and 36 copper modillions. The project also included removal and re-roofing of the slate mansard roofs and restoration of damaged brick and stone masonry. For the roofs, all slates were replaced with new and reinstalled slate tiles, replicating the original pattern. The adjoining copper step flashings, trim boards and copper ridge were also replaced. Old photo showed there were copper roofs above the mansards, which had been previously replaced with flat roofs. This project reconstructed the original copper pyramidal roofs at the corners. Flat seam and standing seam copper roof panels were utilized to achieve this, along with copper fascia trims, to recreate the original wood trim panels. Great care was exercised in the design of all components; the focus being to create a long-lasting, trouble-free installation that would be true to the design intent of the original construction. The character of this landmark school has been preserved and, with its new copper crown, has renewed its place as a continued source of pride in the Brooklyn community. 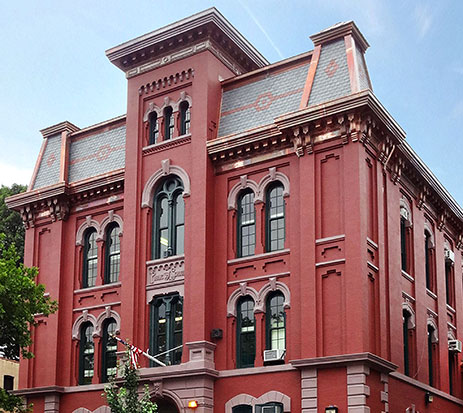 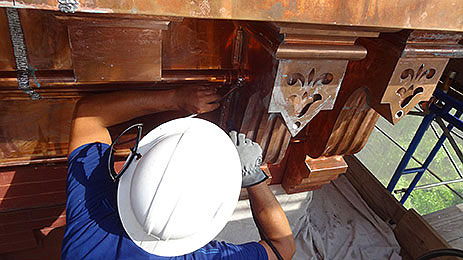 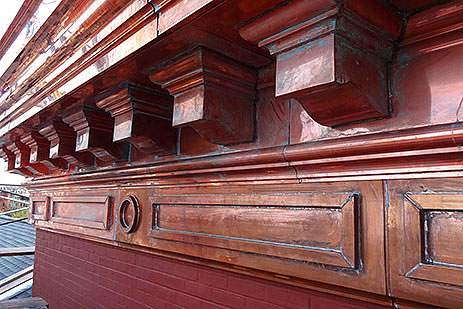 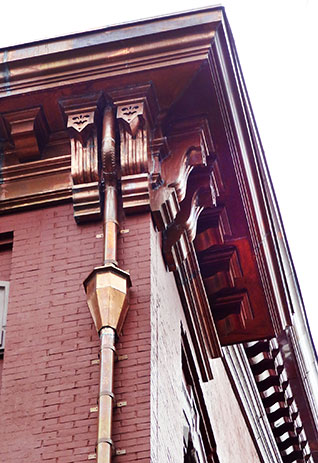 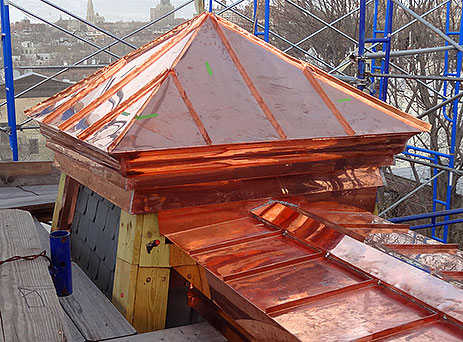 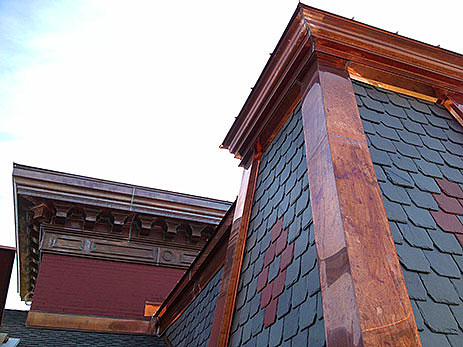 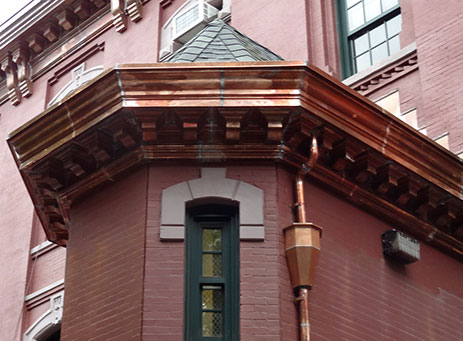 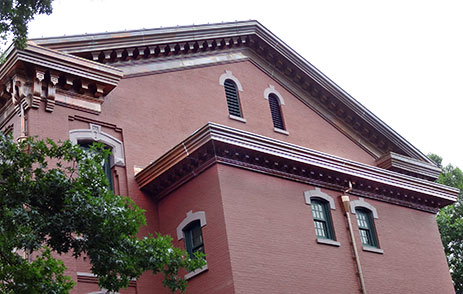