Where Does Copper Come From?

Copper is found in many parts of the world. It usually comes from copper ore, but small amounts are occasionally found ("native copper") in distorted cubic crystal chunks. Keweenaw Peninsula near Lake Superior in Michigan is one of the most likely places to find native copper!! 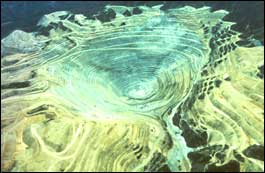 Bingham Canyon mine in Utah

Ore is first mined, then put through a series of processes to refine and purify the copper. The USA is the second largest producer of copper in the world. The largest copper mine is found in Utah (Bingham Canyon). Other major mines are found in Arizona, Michigan, New Mexico and Montana. In South America, Chile, the world's largest producer, and Peru are both major producers of copper. Large copper deposits are also found in Canada, the Ural Mountains of Russia, and parts of Africa.